Artistic expressions animate the corridors of ASU through the “Action, Advocacy and Art” program

For the better part of eight decades, the Morrison family owned some of the largest tracts of real estate in the East Phoenix Valley, totaling over 3,000 acres.

The family’s farms within the limits of what is now the town of Gilbert produced cotton, corn, and alfalfa, and his ranch raised cattle and sheep. At one time, the family was grazing cattle on more than 400 square miles of state and leased land stretching from Flagstaff to the Verde River.

Several photographs of Marvin Morrison, a prominent member of the family that bears the name of ASU’s Morrison Institute for Public Policy, are displayed in the University Center lobby on the downtown Phoenix campus. Photo by Gina DeGideo
Download Full Image

A photography exhibit that recently opened in the lobby of the University Center on Arizona State University’s downtown Phoenix campus tells a visual story of this land, which has been transformed from its agricultural uses and original ranching into a thriving community planned by Gilbert called Morrison Ranch. The community lies in an area roughly bordered by Guadalupe, Greenfield, Warner, and Sossaman roads.

For much of the time between the Morrisons’ initial settlement in the area in the 1920s and today, Marvin Morrison’s photographs have documented the rich history of his family’s land. They were taken between the 1940s and the 1990s, a period of rapid growth in the region.

Marvin died in 2007. More than a dozen of his photographs, each depicting a part of rural life in the East Valley that in many ways no longer exists, are on display at the University Center, 411 N Central Ave., Phoenix.

KNEW Morrison Institute for Public Policynamed after this influential and contributing family and based at the University Center within ASU Watts College of Public Service and Community Solutions, celebrates its 40th anniversary this year. Marvin, his wife June and son Richard were instrumental in founding the institute in 1982.

Richard Morrison is an associate professor at the Sandra Day O’Connor College of Law and is a member emeritus of the institute’s board of directors. He is also the recipient of the very first Sue Clark Johnson Leadership Award in 2016.

Several of Marvin’s photos, taken as he worked his family’s land and participated in local affairs, are included in a book commemorating the anniversary of the institute. The photos depict the hard work done by farmers and ranchers, who wore Stetson hats and cowboy boots as they managed the land, as well as some of the tools and vehicles of the time.

A Unique Perspective as Guardians of the Earth

Director of the Morrison Institute Andrea Whitset said the exhibit provides an understanding of the Morrison family to those who might be more familiar with the institute’s research portfolio, which in recent years has included a focus on child welfare, health policy water and housing affordability.

The family’s unique perspective as stewards of the land gave them insight into the drive for a balanced and effective research institute not driven by partisan agendas, she said.

“The exhibit provides an opportunity to appreciate more deeply the Morrisons’ incredible work ethic and their deep roots in the state – a dedication to Arizona that has manifested itself in a tradition of civic leadership and philanthropy “, said Whitsett. “Understanding the land has given them a unique perspective on how Arizona must carefully balance people, growth, and natural resource management in its policymaking. They can see things both from a rural and urban perspective and want the state as a whole to prosper.

Mesa artist Gina DeGideo created the artwork for the exhibit, curating the images from hundreds of slides, negatives and prints from photos Marvin Morrison had taken, and writing a text to accompany several of them. An ASU alumnus who earned her Bachelor of Fine Arts degree in 2012, DeGideo was introduced to the Morrison family while continuing her education.

“I was actually working with my own photography in a lot of areas that used to be the Morrison family farms for the landscape photography project I was doing for my BFA thesis,” DeGideo said.

At the time, DeGideo was an intern at a downtown Gilbert gallery and art lab called Art Intersection, close to the Morrisons’ lot.

Later, DeGideo became the director of the Intersection Art gallery and held that position for about seven years. She said its owner, Alan Fitzgerald, knew Marvin’s son Howard, who approached Fitzgerald and the gallery’s former curator with a large archive of his father’s photos and the idea of ​​creating a body of work. from them.

The photos featured today were originally exhibited at Art Intersection. About half of them include text written by DeGideo, based on his conversations with family members, that provides additional information and perspective.

“An interesting historical point of view” 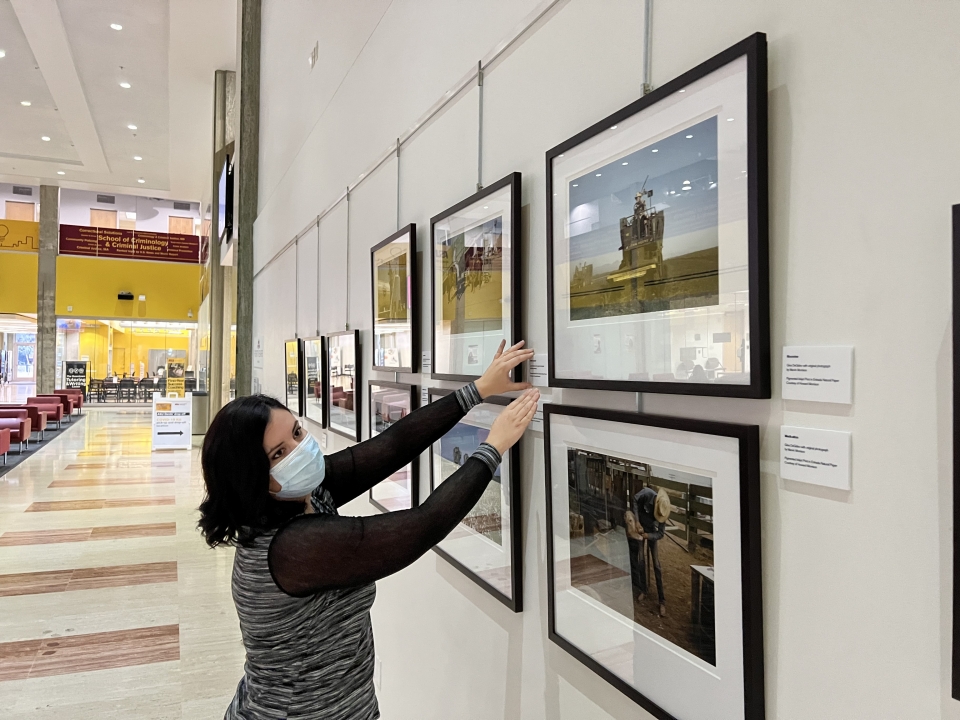 Artist Gina DeGideo affixes label copy to an exhibit of photographs by Marvin Morrison of ranch and farm life in the Gilbert area from the 1940s to the 1990s, on display at the University Center on the ASU campus Downtown Phoenix. ASU Photo by Steve Kilar

DeGideo said she was aware of the land the family owned, having lived in the area for several years, but was unaware of the stories behind the photos.

“Initially, all I knew was that there was farmland turned into housing estates with white picket fences and tree-lined streets. It was something that for me, a landscape photographer from Arizona, was a little foreign, which is what drew me to this area,” DeGideo said. “After meeting the family, it was really inspiring that they wanted to take charge of the future of their land and develop it themselves. They created their own aesthetic with the space and created a legacy for their family.

DeGideo said the exhibit tells an important story in the state’s farming and farming history, which may not be the first thing many people think of when they think of modern Arizona.

“They raised cattle and cotton, alfalfa, all the things that Arizona is a big producer of. It’s an interesting historical perspective,” she said.

The exhibition is expected to be on view throughout the fall semester of 2022.